The following are the talking points of Dr. Joiner's presentation to the Rotary Club and the Bicentennial kick-off address in Athens Al on March 3 and 4, 2015.
Prehistoric: In the Beginning

The planet earth is supposedly 4 billion years old and was covered by water for most of this period. 600 million years ago, the Appalachian Mountains appeared from the ocean floor. They are the oldest part of Alabama. The Piedmont Plateau in east central Alabama are about 500 million years old.  At one million B.C., Mobile and Baldwin Counties are the youngest part of the state. Some of the prehistoric animals roaming Alabama include dinosaurs. A 55-foot skeleton of a basilosaurus is in the Smithsonian Institution. The skeleton’s of hairy mammoth elephants and saber tooth tigers have been found. Bones from eight different species of sharks, including tiger and white sharks, have been found in the coastal plain. The bones of the plesiosaur, a large ancient marine reptile, have been found in Greene, Hale, and Sumter Co. 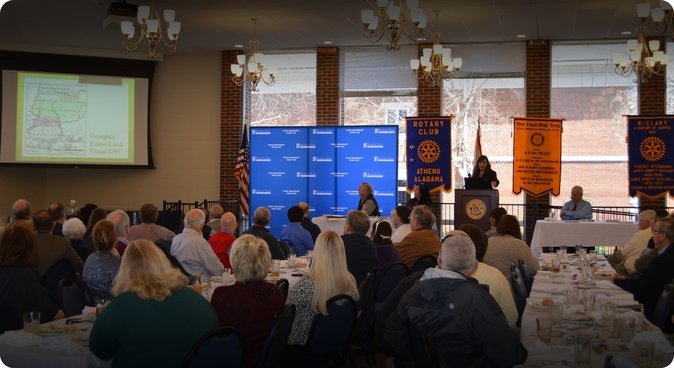 The Spanish were the first Europeans to discover and explore Alabama. Mobile Bay appeared on a 1507 map as the Bay of the Holy Spirit. They called the region from Georgia to Mississippi, Florida or Full of Flowers. The Carolinas were called Appalachia.

1519 - Alonzo de Pineda left Jamaica to explore the Gulf Coast. He was looking for gold and explored the land around Mobile Bay.

1540 - Hernando Desoto was the first European to explore the deep interior of Alabama. The expedition of 600 soldiers left Cuba for Tampa Bay and then proceeded northward into Georgia. At Rome, Ga., they followed the Coosa River into Alabama. They followed the Alabama and Tombigbee Rivers southward looking for gold. They killed Chief Tuscaloosa and burned the village of Maubila before following the Tombigbee into northeast Mississippi.

1682 - Robert de la Salle was the first European to travel the length of the Mississippi River. He claimed both sides of the river for France, which is the origin of French Louisiana.

1698 -  Jean and Pierre Le Moyne of Montreal led 250 colonists to establish a French colony at the mouth of the Mississippi River. He abandoned the idea because of excessive flooding and stayed in Biloxi for several years.

1702 -  The French colony moved to 27-Mile Bluff among the Mobile Indians. Mo-wil-a (to paddle, Maubilla, to Mobile) the cassette girls.

1763 - The British acquired the Gulf Coast, Canada, French India after defeating France in the Seven Years War. They called it Fort Charlotte.

1780 -  The Spanish took Fort Charlotte during the Revolutionary War and renamed it Fuerta Carlota.

1783 - Boundary set with Ga. At the Chattahoochee and the northern boundary with Tennessee was set at the 35th parallel. This boundary ran from the boundary of Georgia and South Carolina to the Mississippi River.

1795 -  boundary dispute with Spain at the 31st parallel. Problem was that Treaty of Paris said 31st parallel but British Charlotte County went as far north as Montgomery. Fort Stoddert and Pickney’s Treaty.
.
1813 -  General James Wilkinson and Colonel Bowyer led an expedition to take Mobile and Baldwin Counties from the Spanish. Mobile did not become part of the United States until 1814.

Alabama and Mississippi were originally part of Georgia. The Georgia claim was based on the charter to James Ogelthorpe from the Atlantic coast to the Mississippi River. 1795 The Yazoo Land Sales (p. 80)

1798 - Georgia allowed Congress to organize part of its western region as the Mississippi Territory with its capital in Natchez.

1802 - Georgia sold its western land to the U.S. for $1.2 million. In return, the federal government agreed to recognize all British and Spanish land grants, settle the Yazoo land claims, acquire land from the Indians, and admit the territory as a single state. Alabama’s eastern boundary with Georgia was extended to northward to Nickajack Mountain in 1802. Alabama, Georgia, and Tennessee come together on top of Nickajack Mountain near Bryant in Jackson County. Origin of name Nickajack.

1806 - The Chickasaws and Cherokees gave up claim to a small area in northeast Alabama. Madison County was created by the territorial legislature in 1808 as the first county in North Alabama. LeRoy Pope bought sixty acres around the Big Spring for a new town called Twickenham, which was the English home of a distant relative, Alexander Pope. The name was changed to Huntsville in 1811 because of the impending War of 1812 with Great Britain. Honored John Hunt the first settler who could not afford to purchase any land. Nashville was also changed from Fort Nashborogh to Nashville.

1813 - Significance of the Creek War. 1813 Mobile and Baldwin Counties were seized from the Spanish by General James Wilkinson and added to the U.S. in 1814.

1814 -  Treaty of Fort Jackson opened up millions of acres of land for settlement in central and south Alabama. In 1819, Montgomery was built on a bluff near the Alabama Indian village of Ecunchati. It was named for General Richard Montgomery killed in Canada. Montgomery County for Lemeul Montgonery who was the first man killed in the Battle of Horseshoe Bend.

1817 - Florence was established when the Chickasaws and Cherokees gave up land north of the Tennessee River. Named for Florence Italy. Andrew Jackson and John Coffee were the major investors in the Cypress Land Company. Some early towns in Limestone Co. by 1820 are Athens, Mooresville, Cambridge, and Bridgewater on Elk River. Early towns in Madison Co. Huntsville, Triana, Whitesburg, Dittos Landing on river. New Market and Meridianville. (reason for name). Lauderdale Co. Florence, Rogersville, Waterloo, and Havana on river east of Waterloo.

1818 - The Enabling Act. On December 18, 1818, Senator Charles Tait of Georgia introduced a Bill to Enable the People of Alabama to Create a State. It passed Congress in March 1819. The federal government was generous to the people of Alabama. It gave 1,620 acres of land at the mouth of the Cahaba River for a state capital. Over 23,000 acres were given for a state university. The 16th section of land in each township was given to support local schools. Five percent of the money from the sale of public land was given to improve land and river transportation.

July 5, 1819 - The Constitutional Convention in Huntsville  The first constitutional convention met in Huntsville. There were 44 delegates. John W. Walker, a lawyer who married LeRoy Pope’s daughter, presided over the convention. Clement Comer Clay, a Huntsville lawyer, was chairman of the committee drafting the state’s first constitution. Clay was probably the most accomplished political leader in the state’s history. He was the first chief justice of the state supreme court and was elected governor, congressman, and U.S. senator.

The constitution of the state of Mississippi served as a model. The legislature was the most powerful branch of government and met each year. It selected the state treasurer, secretary of state, and state judges until 1849. The legislature chose the two U.S. senators until 1916. The five circuit judges made up the first supreme court. State senators served 3 years, while representatives were elected each year. The president of the senate was the first in line to succeed the governor because there was no lieutenant governor until after the civil war. The governor did not have a lot of power because most people did not want him to be as strong as the colonial governors had been. Furthermore, the governor had little power because the state had few responsibilities and little money. The state’s budget was less than $90,000. The governor was elected for two years and could serve one additional term. The legislature could override the governor’s veto by a majority vote. In most states, it required a two-thirds vote to defeat the governor.

The 1819 constitution served the state well for 42 years. All white males over 21 could vote. There were no property, religious, or literacy tests to vote or hold public office. A bill of rights guaranteed basic freedoms, such as religion, speech, and press. Finally, the constitution authorized a state university and bank. Although the first constitution was not submitted to the people for a vote, this was not an uncommon practice at the time.

The First Elections, September 1819 William Wyatt Bibb of Autauga County was supported by people in south Alabama and settlers from Georgia. Marmaduke Williams of Tuscaloosa represented settlers from the Carolinas and north Alabama. Over 15,000 people voted in the first election. Bibb won by 1,202 votes.

Huntsville was the temporary capital of Alabama until a permanent capital could be built at Cahaba. The first session of the legislature was in October 1819. There were 45 representatives and 22 senators. John W. Walker of Huntsville and William Rufus King of Selma were elected to the U.S. senate, while John Crowell of Russell Co. was the first congressman. On December 14 (Alabama Day), 1819, Congress accepted Alabama as the 22nd state of the Union. The state’s population was 65,946. There were about 44,900 whites, 21,000 slaves, and 114 free blackmen.  Limestone Co. had 4,489 people. There were 3,473 whites, 1,015 slaves and 1 free blackman.

The Attempt to Annex Northwest Florida

1. The steamboat was invented by Robert Fulton in 1807. By 1817, steamboats were traveling Alabama’s rivers and some steamboats were built in Mobile.
2. The steam train was developed in Great Britain in the 1820s. In 1830, Alabama’s first train connected Decatur and Tuscumbia.
3. In 1834, Alabama built the first canal in the South around the Muscle Shoals.
4. Alabama established a medical school in Mobile in 1859.
5. In the 1890s, the Alabama Polytechnic Institute in Auburn had the South’s first school of veterinary science and the first program in electrical engineering. John Heisman, the father of the forward pass, ran the football program at API between 18951900. The University of Alabama had programs in civil and mining engineering.
6. Electricity Invented in 1837, the telegraph was the first practical use of electricity. In 1848, the first telegraph line was built between Montgomery and Mobile. In 1852, a second telegraph communication lines was built in the Tennessee Valley along the Memphis and Charleston Railroad.

The next use of electricity was to light city streets. By 1883, a small brush dynamo furnished electricity for 31 street lights in Montgomery. By 1890, street lights powered by generators were glowing on the main streets of five Alabama cities.

Hydroelectric plants were developed in Switzerland in the 1880s. In 1896, Alabama had a small hydroelectric plant in Tallassee at the falls of the Tallapoosa River to supply electricity to Montgomery. The first steam plant was built in Gadsden in 1913 on the  Coosa River. In 1917, the world’s largest steam plant, Gorgas, was built in Walker County. In 1970, the world’s largest nuclear plant, Brown’s Ferry, was built in Limestone County.

Huntsville is one of the nation’s leading centers for scientific and engineering research and development.

In conclusion, Alabama is a beautiful, progressive state with a great future. It is easy to understand why many people refer to their state as “Sweet Home Alabama.”